How are you my long neglected blog?

I don’t know if it’s the weather, hormones or something I ate, I was walking around with dark clouds above my head with occasional rain, thunder storms, tornadoes, hail and everything weather related.

The only good thing about this “episode” is that people leave me alone but because life is sometime a big joke, there are those who just won’t stop. BUGGING me. If only you could see the things I did to them, in my head of course, it’s not pretty.

Ekiel just got better from fever and eye infection. One a good day, he would just chew the panadol without much question but he can be difficult when he wants to. Like the other day, I had to persuade him to take his medicine for 30 minutes. He cried and he cried when suddenly he smiles and take his medicine without a fuss. WTH.

I managed to put a drop of the eye medicine in one eye. Shocked [from the cooling effect], he starts rolling them like in the cartoons. He said it hurts and now completely refuses to take them. He has so many distracting tricks up his sleeve.

Ekiel: There something in your eye

Me: *wipes* My mascara cair already waiting for you

Ekiel: Oh, I thought you want to die already

He is still coughing though. His cough is so bad sometimes, I freaked out. With that much of coughing, it’s amazing that he didn’t cough his lungs or any of his internal organs out.

Last Sunday, three brothers from the age of four to eight came over to my house while their parents (parents’ friend) went to do their thing.

Now, I know boys are tough and rough, but when these three boys [and their two older sisters] fight, I get scared. They threw their punches hard and most time at the fragile places. So when the eldest and youngest boy was fighting over a broken toy, they started hitting each other when the eldest kicked the youngest’s balls. The poor boy came to me while holding his family jewel and started crying. I looked at Ekiel and he was just standing there all big eyed and with his mouth open. He then ran to me and said, “Mommy, see, I am not so naughty now kan?” I just looked at him and nodded. He does have a point but I was not going to let him know that. He then told the eldest, not to hit the youngest and said, “No blessing that, you hit M”.

I tried to distract everyone by having a contest. Anyone who sings to me will get a surprise gift. Ekiel said he wants to sing the ABCs. Now, Ekiel has this bad habit for being a very sore loser. He doesn’t like it when he loses or when other people make fun of him when he doesn’t know stuff. Those three boys would surely make fun of Ekiel as he is not very good with his alphabet so I crossed my fingers and braced myself for the drama.

When he managed to sing the ABCs perfectly, I did my happy dance. I didn’t realise how much he has learned in school. Only last night I realised he now recognises the entire alphabet. *claps hand*

So okay, he needs to work on the spelling bit. The funny thing is, he is at a phase where he spells everything he sees. Yes, none of the spelling is correct and after a while it can be annoying. He is also irritating when he corrects you correcting him.

Ekiel: Mommy, that is wrong. C is for cat. 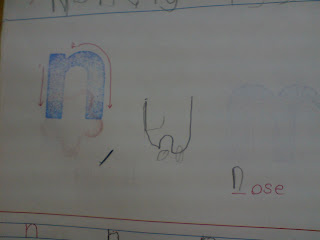 It's obvious, Ekiel has no talent in drawing. Yes people, that is his drawing of a nose

hahhah.. ur anak so katun kan.. at first i tot he lukis N terbalik punya..

tu larr. did u noticed the bulat2 at the end? he said itu booger. imagine him telling that to the teacher. :D