We arrived in Krabi airport in the afternoon and we immediately queue up for the immigration process which took FOREVER. Yes, it felt that long. There was only two counter available and because we took our sweet time to come out from the plane, my sister and I were among the last few.

The immigration guy wasn’t so friendly and he actually tossed my passport on the counter after he finished doing whatever it is they do. When I opened to check, I was pissed to see the blue ink on my profile page. Macam kena cancel my passport ni. I know it was an accident, but he could at least apologize for it.

A travelling friend was supposed to come for the trip but that person did not even bother to neither show up nor call us to inform that he is not coming. When my sister called, a little girl picked up the call and claimed that he accidently left the mobile in the kampong and he already left for the city. WTH?

He’s so lucky I do not know him.

Because of that person, we arranged for airport transfer from the hotel because it would cost us more or less the same if we took the bus. Taking the cab to Ao Nang is 600THB (RM60), and the bus is at 150THB (RM15) per person.

It took us about 40 minutes to go through immigration, but Sam, the hotel manager where we were staying, waited for us patiently.

The drive to Ao Nang was about 40 minutes or so. If it weren’t for the signboards, I would think were we still in Sabah, except for the many hills along the drive.

For some reason, I’ve always thought Krabi is an island. *head hangs in shame*

I was kinda disappointed to see what I see but all that changed once we turned to Ao Nang Beach. *woohoo*

Ao Nang beach is a long stretch of U-shaped road with hotels, restaurant, tour agency and stalls selling almost everything a tourist would need. Facing the shop houses is the beautiful beach. I thought the view was *wow* but trust me when I say the view just keep getting better. 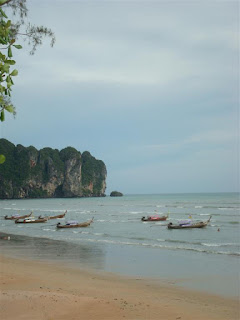 Posted by angelicbug at 3:21 PM