The past two days when I see Ekiel sleeping peacefully while I was rushing for work, I wish I was on a school break. I didn’t even thought of planning something for Ekiel’s first school break until someone asked me about it. *head hangs in shame*

It seriously slipped my mind but I shall organize something for him this weekend.

I want to be one of those mothers who provide her child the best school break ever because mine was mostly spent at home, wasted in front of the idiot box or behind a book, which of course is a very good habit if you ask me.

I do remembered being sent off back to my mom’s village with two of my siblings and the VIP treatment we got because we were child travelling without adults. Well, the only thing I remember about that flight was we were given lots of juices, candies and those airlines stationeries which I thought was the coolest thing ever.

Then I remembered after the flight my grandma took us to a goldsmith to get me and my sister’s ears pierced. That and the best plate of fried mee I have ever eaten at the food court on top of the vegetable market.

As I grew up with more advanced pleading skills, I get to do lots of stuff like volunteering in charity homes, hiking, camping and everything else that went into hiding at the back of my mind. Too many memories to mention only one so here are bits and pieces of the adventures I had. Yes, I actually am a little confused which memory belongs to what outing. *whistles*

There was a trip where one of the boys only used his briefs and soaped himself silly before jumping into the river. He was the first boy I see in his undies. It was more like a stick who borrowed someone else’s baby blue briefs.

One of the boys tucked in his school t-shirt in his purple tights showing of his *ahem* family jewel. It was not a pleasant sight and I never liked the color purple again.

I had my first bath in the river with more than 50 girls. It was awkward but fun until a friend shouted “Make way! Make way!” and floated by us was her used sanitary pad. *LOL* She must have used a panty too big for her. Sure it was gross then, but when I think about it now it is so funny. *wipes laughing tears*

On a hiking trip, we were told to carry with us pots and pans plus the necessary supplies to prepare lunch during the hike. After an hour or so, we realized our group was lost and to make things more dramatic, it started to rain not so heavily and our group accidently breaks into two. My mini group went pass the same marker three times before finding the right path back. We were so happy to find our way back, we completely forgot about lunch. Bikin berat saja.  The second mini group only returned an hour later. One group wasn’t as fortunate as us and only returned after the search party was dispatched to look for them. 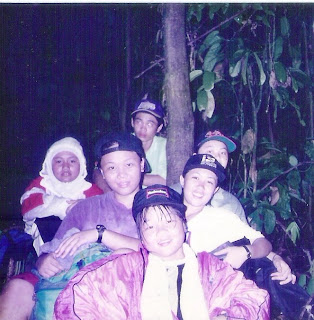 On the way back, I was so happy I started crying until the boys (I was the only female at that mini group) decided to celebrate by swinging the hanging bridge we had to cross 10 minutes away from our camping ground. The more I screamed the more they swing, until I decided to sit in the middle of the bridge refusing to budge. They took about 15 minutes to coax me to move and were only successful when one of the boys promised to cook me something other than sardines! I had his personal supply of canned curry chicken that night. I swear that was the best canned curry chicken ever!

We made a mistake by taking a group of children to see the Rafflesia. What was supposed to be a thirty minute hike became a two hour hike thanks to a guy who OBVIOUSLY sucks with maps and directions (the best thing is, he declares it wasn’t his fault!). That wasn’t the best part. It rained the night before so when the children saw the leeches came out to play, a few of them refused to walk and started crying. I swear I could hear the appointed team leader swearing at me (I was the organizer) when they had to carry one child each throughout the hike. The super best part was, I was so out of breath, I was the last one to reach the meeting point and a few of the guys had to accompany me fearing I would past out and they would need to roll me back. Yes, the female team leader did all the carrying. *grins* However, the top highlight of the hike was the disappointment and frustration apparent in everyone’s face when the only Rafflesia we saw was only the size of a dinner plate! I wasn’t the most popular young leader that day. My sister is still pissed at me till today.

Lastly, the Anugerah Remaja Perdana in my school decided to organize a hiking trip to a nearby waterfall. Imagine my horror when some of the members showed up in skirts and heels! It rained the night before so the hike was slippery. One of the girls lost her footing and sprained her ankle. Since I was the President of the Club, it was only right that I helped her to get down the slippery slopes right? I was still disoriented with my almost drowned incident and as we turn to a corner off the slope, I slipped and off I went. I thought I was a goner but I was saved by a small plant exactly at the end of the corner. Though I have no balls, my crotch did hurt when it slams into the tree. Yes both my legs were around the tree and I was holding on to it for my dear life. 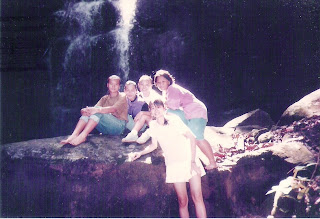 I was saved twice in a day. I am destined for great things. I just have to figure out what. *sticks tongue out*

I had lots of fun and I hope Ekiel would have memories like this when he grows up.

Angie, nice memories kan. Well, those were the days. During my time pun, I think I have so many memories too.
Well, you bring your son balik kampung bah, he will definitely enjoy the company of others kids from the kampung tu....

tu larr bak stoney.
those days are so much fun.