The Quiet Guide and The Talkative Driver pointed to us interesting buildings and what not. We ohhhed and ahhhed but we, well I, was speechless when we reached the American Cemetery and Memorial in Manila. With that much history and grief, that place is so beautifully peaceful. 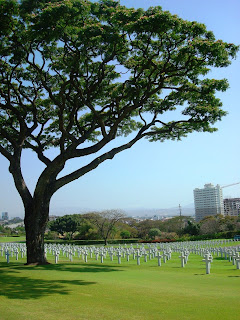 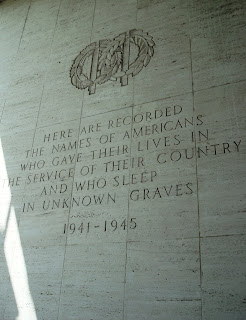 Names of the fallen heroes 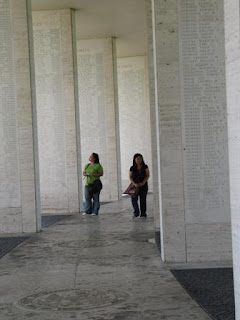 blocks and blocks of names 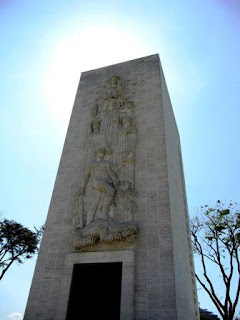 We had brunch at McDonalds. The menu is somewhat similar except for the burger with backed beans and they serve rice with their fried chicken and nuggets. Oh, they also have fried chicken and spaghetti. How cute is that?

When they told us we’re going to see an active volcano, I imagine having to hike the volcano to see steams coming out from the peak. I saw something about Taal Volcano in the world wide web but I never really pay attention to it because it was about 2 hours drive from Manila. It didn’t make into Our To Do List.

I was so comfortable in the car and with the aircond in my face I dozed in and out of sleep throughout the trip. *head hangs in shame* However, my sleepiness disappeared when I saw Taal Volcano. For the second time that day I became speechless and that, is a record people. 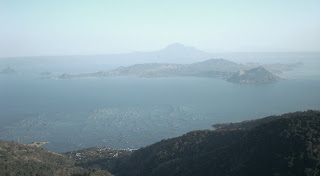 even with the haze, the view is still stunning

Taal Volcano is situated in the middle of Taal Lake, which we thought was the sea because it was HUGE. But excuse me, if it wasn’t the sea, than what are those little islands doing there? And those fishing thingy? Despite the haze, it was one of the most beautiful natural things I have ever seen.

I know we were at Tagaytay, but I have no idea where exactly we were going but I am sure it is somewhere great. Yes, I have that much of confidence in our guides despite the heart attack-ing driving, the somewhat bad sense of direction and the conflicting facts. It kinda made the whole trip more, fun.

Our first stop was a small chapel called Our Lady of Lourdes Church. It’s a small chapel overlooking the Taal Lake. The Quiet Guide bought us some local delicacy; something made with flour and sugar as well as the sweet Indian mango. Now the locals eat it with shrimp paste but I find it a little weird. The shrimp paste was tasty and I would have eaten it with rice instead. 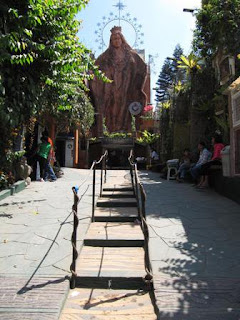 the entrance to the church 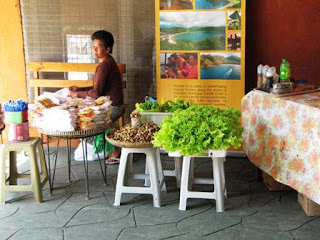 delicacies sold by the locals in the church


Our next stop was Good Shepherd Sisters of Maryridge. The sisters from the convent are well known for their yams and other local product which they manufacture on their own. We tried the Ube (yam in Tagalog) dimples (it was rolled into small balls with dimple on it) and their flan. The dimples were a little too sweet for my liking and I am not being bias but I still prefer my mom’s flan.

I still have two small containers of the dimples if anybody wants to try them.

We continued our journey to the Country Club at Tagaytay Highlands. The road to the country club was winding but it looked pretty cool from a distance. The winding road that is. The view from the cable car block or whatever it is called was fantastic. Despite the hot sun, the wind was blowing. I could just sit there for hours and do nothing.

We went to see the outside of the country club and the place is better than most Country Club I know. *whistles* Bah, that’s the reality. The Chinese restaurant is so cool with its temple-liked concept. Although the club is a little run down, it does have a certain charm to it and the location was certainly a plus point. 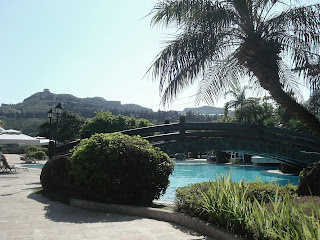 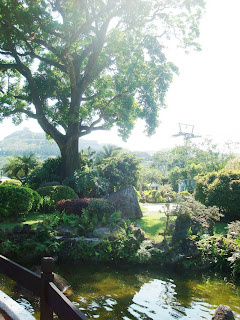 We then went to the other side of Tagaytay for lunch at this placed called RSM Lutong Bahay Restaurant. It has a gorgeous view of Taal Lake and you could also rent the giant telescope to look at Taal Volcano closely. What did I see? Well, since it was the drought season, all I saw were rocks or was it dried grass? I am not so sure. I only looked for 15 seconds before I lost my interest. 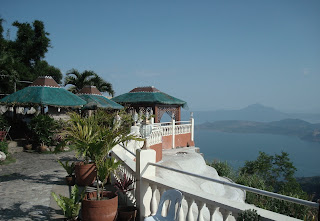 the view from the restaurant

Food was obviously good though the service was a little slow. We were half way done with our food when the drinks which we ordered earlier arrived.

We also visited the Pink Sister Convent who obviously wore pink habit. Why? I don’t know. 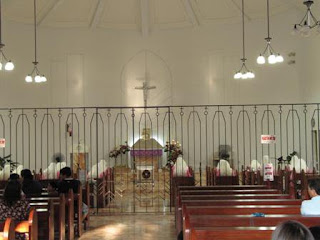 during the sunset mass

On our way back, we stopped by the roadside to get some Japanese corns and it is yummy!

There were plenty of things to see and buy, like the beautiful flowers, plants, cool carvings but we were too shy to ask them to stop. They also offered to take us to Greenbelt which we declined because all of them looked so tired.

Since this is our second last night in Manila, we decided to go out. We chose to go to Remedios Circle because it was nearer. There were plenty entertainment outlets but some looked a little dodgy. We chose Tia Maria because I remember reading a review about it on the world wide web and it looked pretty decent from the outside.

Tia Maria serves delicious Mexican food like nachos, tacos, burritos and many others. I am not a big fan but the food was good and the price was cheap. We also had local beer San Mig which is one of the local beer, I think. It’s very light and that is dangerous because if you’re not careful, someone will be hugging the toilet bowl later. 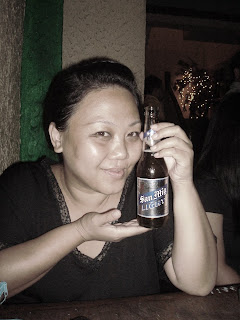 I'd be a good poster girl to deter people from drinking. Hee

Now, Filipinos are known to be good singers. They had two bands; 360 and Puzzle, which alternates every hour. Both bands are energetic and entertaining BUT I have to give Puzzle kudos for performing Hip-Hop & R&B music non-stop (the other band talked a little too much) AND I was impressed with the ‘uncle’ male vocalist. He looks like he’s in his 50s and yet he is energetic and could rap those rapper wannabe to SHAME. Too bad I don’t have a clear photo of him.

We left early as we need to start early the next day.

Posted by angelicbug at 9:33 AM