The Philippines trip was good though it didn’t happened the way I, well we imagined it to be. The Cherry Third Quarter Kinky Queen promised to torment me about this for the longest time. Oh well. I had no regrets skipping the whole crazy night outing.

After 6, well technically it was just 4, days in the Philippines, I am still a little confused about the whole neighbourhood system. One minute we’re in Manila, the next San Juan, etc. There is also Metro Manila, which I do not get despite the somewhat detailed explanation by our very nice local guide.

No worries, as long you remember the name of the street and the neighbourhood you’re staying, you’ll be fine.

Anyway, thankfully it was only a two hour flight to the Philippines via Kota Kinabalu as I tend to get very restless in the plane. I was slightly disappointed to see Malaysian faces and names serving us on board. I was hoping [someone who looks like] Diether Ocampo would push the food trolley down the aisle.

We had to fill the immigration form in the plane and there are some sections which I found confusing but I must have filled it right. By the way, I don’t understand why they make the answer column so bloody small and you had to squeeze everything until it is barely legible.

We landed in Clark airport which was officially named as Diosdado Macapagal International Airport by President Arroyo in memory of her father, the former President Diosdado Macapagal in 2003. I’m sure everyone knows that the airport was the Clark Air Base for the U.S. Air forces until the late 1991, where it was closed after the explosion of Mount Pinatubo. The airport is currently in its renovation phase, so there is nothing much to see or do at the airport. 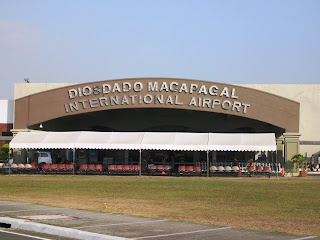 
The immigration process was quick but when the very serious looking guy asked, “Clara, how long will you be staying in Manila?” in his strong accent, my mind froze for a while. Cherry Third Quarter Kinky Queen had to give me the date before I embarrass myself further at the counter. The guy must think I am so blonde. Oh well. Nasib baik dia tidak hensem.

One of our biggest concerns was to find transport to go to Manila. Since this is a budget trip, everything must be super cheap. We asked a Filipino chick whom we met in KK and she told us to get a taxi to Dau Bus Station, take a bus to Manila and finally a cab to our hotel. I got the transportation charges from blogs and travel forum and with the head spinning direction to get from one point to the other it will still cost us around RM21 per person for one way.

I continued to surf the website and found out we could get a bus or a taxi to Manila from the airport. The easiest way to travel is of course to take the taxi but that will cost you about RM200 per trip. Definitely expensive but it is a two hour trip to Manila. Yes people, two long hours.

We chose to take the bus which cost us around RM26.00 and it takes us straight to Manila. We decided to head to Pasay as it was nearer to the hotel. There were two bus operators, but we chose Partas because the girl at the counter was the only one who paid attention to us. *LOL* 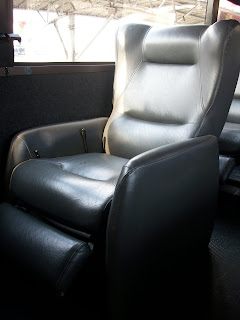 The bus was air conditioned and comfortable. They even put a DVD on - Haeundae, a Korean movie about the tsunami expected to hit Busan, Korea. At first, I was busy enjoying the view of the acres and acres of paddy field but as soon we entered the city, my eyes were fixed on the movie.

We reached Pasay around 6.00pm. The moment we stepped down from the bus, people just gathered around us offering all sorts of services. One taxi driver offered to send us to the hotel for only USD10 and according to him the neighbourhood is dangerous and there is no public taxi around. Only USD10? That’s like RM34 for a cab ride.

We wanted to take the LRT but we were told that baggages are not allowed. We didn’t get to check if this is true as the LRT looked too packed anyway. We decided to look for something to eat because we were starving.

We headed down to Jollibee as it was the only place we recognized. I was surprised to see an armed security guard at the door but after a while, it was a common sight and I do feel much safer with them around. We ordered the spaghetti and Palabok (vermicelli served with palabok sauce, pork chicharon bits, tinapa flakes, sautéed pork, shrimps and slices of egg) and it is so yummy.

By the way, I must apologize for the lack of food photos. I was too hungry to even bother about food shots.

We wondered how to get to Manila so we ask the nice staff and he actually helped us to stop a taxi right outside the outlet and the metered taxi only cost us RM8.00.

I found Toilena Board & Room (1419 San Marcelino Street, Manila) through the internet. The taxi driver didn’t know the hotel and we nearly missed it as it was located behind the STAR petrol station. The nice boy greeted us at the counter but he couldn’t understand what we were saying so he went to get his colleague to help us.

[Most] Filipinos are nice and helpful but although we basically speak English, the slang differences make it a little hard to communicate. Unconsciously, I began to sound like them but hey, at least I get things done kan?

We got the family room which fits four and it only cost us RM190.00 per person for five nights. The room is big, clean and comfortable. The bathroom is also super clean so I have nothing to complain except the water heater then gone haywire the third night but it was soon after we complained.

After we checked in, we went to the nearest mall. We know there would be plenty of jeepneys going to that direction, so we asked the blur boy where to get one. Instead of telling us how to get to the bus stop, he took us there.

Now, our nice local guides were surprised to hear that we took the jeepneys to most of the places instead of taxi. They told us not many locals would take the jeepneys because there are too many of them going too many directions. Well, some of the jeepneys have signages on them, and some don’t. Whatever it is, you must always ask the driver if they are going your direction and never be embarrassed to ask them to tell you when to go down at your stop.

Jeepneys are great not only because it is super cheap, only RM0.50 per person per ride, it is also available 24 hours a day and you never have to wait long for one. 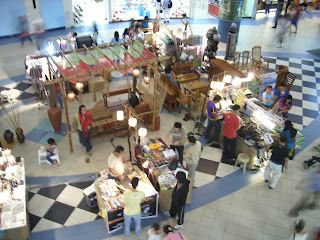 We went to Robinsons Mall at San Juan and I was impressed with the size of the mall. It’s bigger than Centre Point! There are plenty of boutiques, restaurants and food stalls that sells pizza slices to dim sum. There is also a supermarket in the mall. We didn’t get to really explore the place as it closes at 9pm. We went to the food court to get dinner and we stood there for the longest time not knowing what to eat. The choices were plenty and the food was of course unfamiliar so we pretty much depended on the photo or looking what the other customers are getting. I played it safe by getting the BBQ chicken and pork which cost me around RM10.00 but the food was good and the portion was huge. Definitely worth the money.

After the mall was closed, we wanted to take the jeepney back but none of the signage showed San Marcelino. So we went to Treats, a 24 hour convenient store and we ended up chatting with the security guard who told us the jeepneys do pass by the area and we would need to stop at the junction. So we hopped on a jeepney and told the driver to show us where to stop, which he did. Unfortunately, he didn’t show us which direction to go. We asked a girl who was standing at the junction, and she pointed us to one. 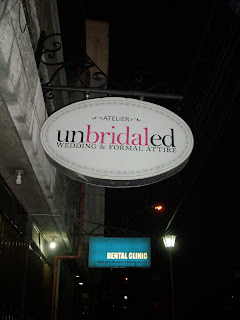 Among the many interesting signboards I see during the night exploration

About twenty minutes later, we realised we got lost. We asked many people the direction, and each pointed different ways and some do not know the way at all. Finally, after one hour and thirty minutes later, we gave up and took the tricycle which he charged us RM3.70 per person. 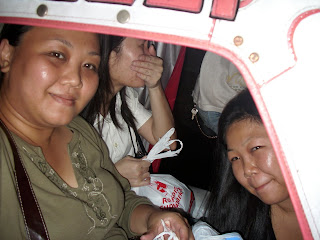 
We finally figured out what went wrong. That girl at the junction pointed us the opposite direction. Had we crossed the road and walk straight, we would have reached the hotel in less than 10 minutes. Instead we ended up walking aimlessly in the night exploring the streets of Manila.

That was some experience.

Posted by angelicbug at 9:36 AM

Well... that's amazing but actually i have a hard time understanding it... I'm wondering what others have to say....

well, u were moody! i guess it was'nt "fullmoon" d time d bitches goes out to play! :P who on earth could send u to the moon if u're moody :P :P