Hello. It has been one crazy week.
Work. Emotionally. I am physically tired.
My whole body (esp my neck) is in pain.
No, I did not run a marathon nor did I do anything physical.
In fact I had a very good massage about two weeks ago.
I guess it is just one of those days.

Anyway, one of the very few perks working in THIS resort is the spa trial (not very sure if other resort with spa has the same thing). Every time the spa gets new therapists, they will invite the staff to try the new therapists’ services and comment their performance. I am not ashamed to admit that I look forward to this and I am always the first few to sign up. Hey, I can never afford spa for myself. 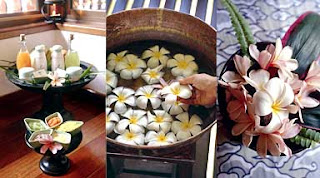 I took the Ultimate Indulgence package that costs RM700++. *evil laugh* I usually take the massage only but I think I deserve a treat for all the work I’ve been doing and the very little pay I am getting. That was my first - full spa treatment experience. I was nervous because I wasn’t sure what to do. I did what most people would do - surfed the net to learn the spa etiquette but the information I got wasn’t so helpful. Or maybe I keyed in the wrong key word. Spa+Etiquette+Jacuzzi+Nude.

When I arrived, they gave me the usual warm and friendly greetings. Bla bla bla. They were telling me about the spa and all but I was too busy admiring the decor to listen. Fyi, there’s two spa at this resort. I’ve only been to the smaller one, which was pretty cozy and nice enough. But this particular spa, the so-called main branch, was WOW. Balinese concept all the way. The workmanship was beautiful. With the traditional Balinese music playing in the background, it felt as if I have walked into a different country. How cool is that? Very.

They led me to the Deluxe Spa Suite. The place was bigger than my living room! They left me for a while so I could change. They provide bedroom slippers, towels and disposal underwear only certain people could fit. *rolls eyes* Oh well. First on the treatment list was the Aromatheraphy Floral Footbath.

I know there were three different oils but I chose the lemongrass (or was it ginger?) for reasons I do not remember. Aching feet? Anyway, I was actually a little shy and embarrassed with my feet who in dire need of a good pedicure work but the therapist was professional enough not to gag or anything like that. *phew*

Next was the Lavender Body Wash. I thought it smelled more like cucumber but anyway it refreshing although a little cold. It was raining heavily outside and though they switched off the fan, they cannot control the temperature of the centralized air cond. With only thin sheet covering my body, I was really cold but the rain made the whole experience more calming and relaxing. There is just something about the rain that I like.

After the body wash, I had the Traditional Body Scrub. Again there were choices of scrub and I can only remember two - Coconut something for something and Balinese Coffee for detox. I chose Balinese Coffee. I smelled so good I wanted to lick myself but that would definitely freak those therapists out. I wasn’t so sure what was I supposed to feel after the body scrub but I do feel very clean.

I looked like the Swamp Thing with all the coffee scrubs. Hee. I was asked to take a shower before the next treatment. The shower room was HUGE. You could tango in there. The showerhead is the kind you fix on the ceiling to give the rain effect. I am so jakun, I know. It was really nice but I didn’t want to get my hair wet. So I had a pretty awkward shower with me walking in and out of the water, with my head moving in every direction because I couldn’t find a shower cap. I know I could ask for one, but at that very moment, doing the ‘Must-Not-Wet-Hair’ move was the logical thing to do.

After the shower, I was given the choice of Aromatheraphy Floral Bath in the jacuzzi or Herbal Steam in the steam room. I wanted to look like the model in their spa brochure, so I chose the jacuzzi. Was really really excited about it. *woohoo* But my excitement didn’t last too long though. Fyi, I wrapped myself in a towel and before I went into the jacuzzi, I had a little debate with myself. Should I go in with or without the towel? The therapists were going around cleaning the place up. The jacuzzi is outside the treatment room but the door to the jacuzzi was a glass door. I am sure those therapists were professional enough not to peek BUT I was SO shy and self conscious I went in with my towel and all. I know it’s stupid considering the therapists had already seen most part of my body *giggles* but I would like to keep those unseen parts, unseen.

While I was in the jacuzzi, all I could think about was how heavy those towels were in water and how do I change it for my massage later. I also poured myself some ginger tea and sipped them slowly as if sipping tea in a jacuzzi was nothing new to me. *winks* I finally told myself to just enjoy and forget about the towel and before I could start doing that, it was already time for the massage. So I hold on to my towel tightly, grabbed a dry towel nearby and changed gracefully. Those years of changing my school pinafore to sports uniform without having to undress completely definitely came in handy.

The massage I had was the Mandara Massage. Mandara Massage: Our signature treatment. A relaxing massage performed by two therapists working in concert employing a blend of five approaches: Japanese shiatsu, Thai Hawaiian Lomi Lomi, Swedish and Balinese. Pure pleasure. If I have another set of hand I would give the massage four thumbs up. Yes, it was that good. It was so relaxing I actually dozed off. When they stopped the massage to do the facial and foot massage, I was so sad. I pouted until one of the therapists slapped some cold lotion thingy on my face. It smelled like fruits. The facial and the foot massage weren’t as great as the Mandara massage but it was good enough.

The whole treatment lasted for 2 hours and 30 minutes. I wish it would last longer though. After the treatment I felt really good, the headaches stop, the muscle wasn’t aching anymore. I felt almost like brand new. Well, you know what I mean. Hee. Now I know why some people are hooked on to all this. This is definitely a great way to enjoy life and pamper yourself.

Now I think I would call the spa manager just to say hie. If I’m lucky, I could try their famous champagne jacuzzi. *giggles* Next time I will definitely take pics.
Posted by angelicbug at 4:42 PM