When my colleagues told me the petrol price will be increased at 12.00am yesterday, little did I know I would somewhat get involved in the commotion.

After sending my mom and the other family member off to Jakarta yesterday *jealous*, we went to the beach to buy some “junk food”. On the way back, we were surprised to see cars lining up at the petrol station when we realized they were lining up to pump petrol before the increase.

I don’t remember who but someone suggested we do the same considering the petrol meter thingy (what do you call that thing) showed we have three bars left. The logic thing to do was to pump at the petrol station nearest to our house. So off we went still oblivious to what was happening all over Malaysia.

Then it happened. Traffic. Really long traffic. *smacks head* Whole of KK was out to pump petrol. To make the situation worse, some idiots with no brain just cut queue shamelessly. There are also people who do not bother to follow the traffic light and making illegal turnings here and there. We even had to use a longer route because the junction we need to use to go home from the petrol station was blocked by cars wanting to go in to the petrol station illegally. *shows middle finger*

It took us about two hours to pump petrol just to save RM21.50. Bloody hell. When we think about it, it wasn’t the smartest thing to do. Sitting in the car, caught in traffic while it rained/drizzled is no adventure.

With the petrol hike, the price of EVERYTHING else will increase too.
This morning I paid RM2.00 for a Nasi Lemak that used to cost RM1.50.
*shakes head in disbelief*
I was so hungry; I had no choice but to pay while giving the Nasi Lemak seller a dirty look. 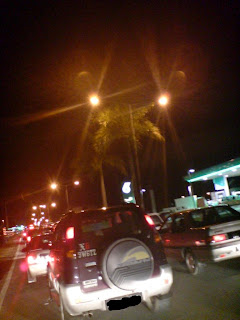 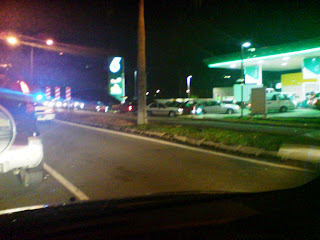 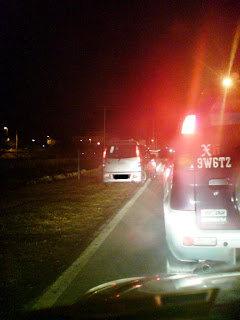 The one of the idiot who cut queues 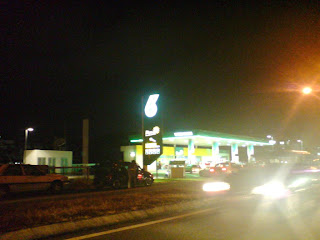 Can you see the drive pushing the car to the petrol station? I wonder why... 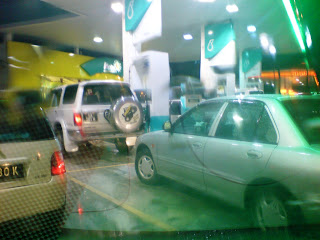 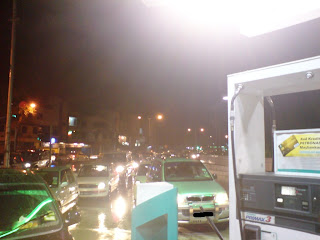 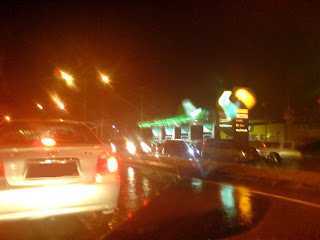 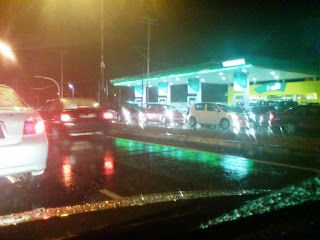 Posted by angelicbug at 9:54 AM

We also had to queue, but my husband couldn't wait and we had a hungry kid in the car, decided to head back home.
However, I do feel the price hike of 78 cents in petrol is so absurd. Kalau semua naik, gaji pun patut naik la.

I agree!!!
Ni gaji tdk pandai naik2. for a country like ours, we should be able to handle the economy better.

i had to go sampai jln sulaman to fill up my almost empty tank oh...

im lucky my boss kasi naik gaji 5%... MUAHHAHAHA...btw.. that kembara infront ur car.. shud padam also the numbering on the back of the car.. that is their ID for the walkie talkie thingy.. hihihi..