I’ve been having a massive headache since Friday. I am not sure who is the culprit but I need it to stop! With all the drama, bertambah-tambah lagi my head throbs.

I sometimes wonder how some people can just over react over the smallest thing. I wonder even more how these people could just get everyone else involved. I am not talking about anybody in particular because this is a very common, everyday occurrence.

I wonder if I do the same thing?

Recently we had a Family Day at work and I took Ekiel and my sisters to join the fun. I think Ekiel was intimidated by the crowd because he became grumpy the first hour. When someone pulled him up on stage to do some exercise and dancing, he crossed his arms and pouted on stage. He also gave everyone who touches him the dirty look. *whistles* 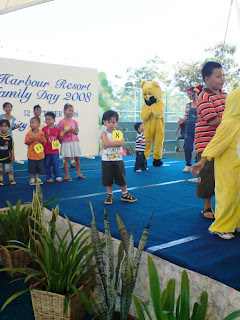 Thank goodness after a while he began to loosen up and enjoyed himself. That is after I threatened him that we would go home if he doesn’t stop sulking and bribed him with candy floss.

The Colouring Contest as a flop because he only coloured like 20% of the picture before he got tired of it and told me he is having a headache. 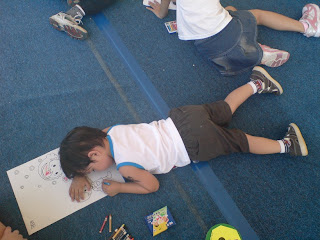 The Superhero Kid was much better. He confidently walked to the centre of the stage, did his Ultraman pose and gave the crowd a flying kiss. Too bad he didn’t win because some of those kids came with a full costume including mask. Next year we’ll come fully prepared! 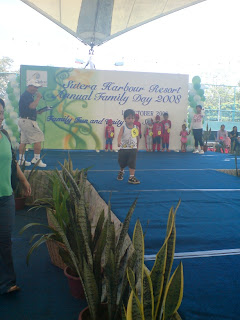 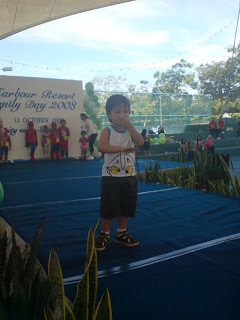 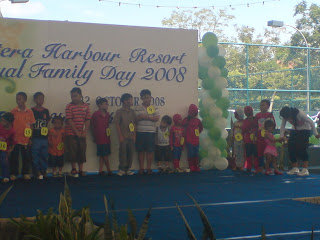 There wasn't much for him to do but he really loved the golf putting thingy. No, he is not the next Tiger Woods. 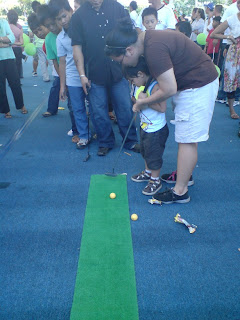 He made some friends during lunch. All they do is run around the table but they really enjoyed themselves. 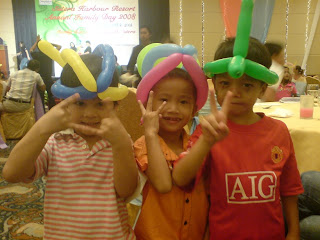 When the boys left, Ekiel went to the other table to make friends with the other kids. All he did was stand in front of this boy and a girl and those kids were intimidating him. The small girl was showing her fist to him while the boy was trying to push Ekiel away. I am surprised Ekiel did not retaliate but just stood there looking at them confused.

I cannot imagine what will happen to him when he starts pre-school next year. Thank goodness he is at the age where peer rejection doesn’t really matter to him. 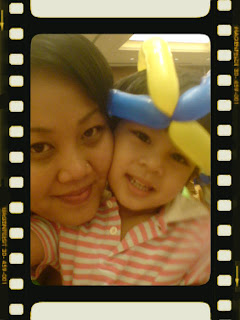 Towards the end of the event, there was this game where the Emcee asked you to bring a list of items and the first person to do so will win a voucher. My son was very excited to see the people running up the stage and what not so he wanted to join the fun. He didn’t realize how crazy it was will people pushing and not giving a damn about you.

My sister stopped him and he was so bloody upset.
He started crying and screamed “I kalah odi. *sob sob* Carmen make me kalah. *sob sob*” over and over until we got in the car to go home. 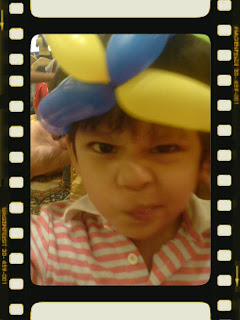 Posted by angelicbug at 1:56 PM