We were at a dentist for Ekiel’s first dental check up recently.

Ekiel’s eyes grew bigger. I corrected the dentist and she was embarrassed and apologized profusely. Thank goodness he did not punch the dentist in the face. If it were one of the family members, he would. He just sat there looking like an innocent angel until we got home and I told the stories to my family members. He karate chopped me.

Since school reopens today, I took him for his bi-annually haircut. Where to go but to the safest barber in town. 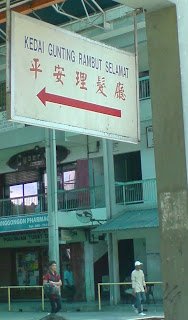 When my brother came back almost bald, Ekiel wanted to cut his hair the same way too. Though I didn’t like the idea, I told the barber how Ekiel wanted to have his hair cut because I think it is important for him to have a say in his “fashion”. 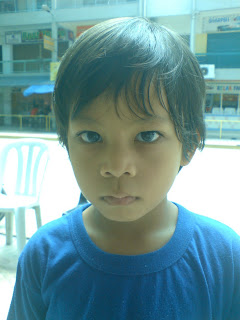 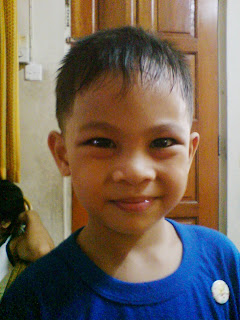 He looked so grown up now. *sighs* I used to twirl his hair when we go to sleep but last night, I only get to rub the shaven bit. Not the same, but can do larr.

Well, at least I don’t have to spend much time washing his hair. He told me he doesn’t need shampoo anymore. I don’t think so little boy.

Posted by angelicbug at 4:22 PM