We knew Ekiel was going to participate in a recycled costume contest two weeks before the event, but we couldn't decide the costume because our imagination and creativity went into over drive.


There were talks about water droplet, a tree, and at one point Ekiel wanted to be a pail. Yes, people, my son wants to be a pail. Then three days before the event, he finally decided that he wanted to be Birdboy, a character that was never discussed.

And because I am the world's *ahem* greatest mommy, I agreed without hesitation. Desperation usually brings the best of me.

Stuffs for the Birdboy costumes

I cut colored plastic bags into strips and use double sided tape to stick them together. I tried glue, but the plastic strips curled and it was VERY messy. 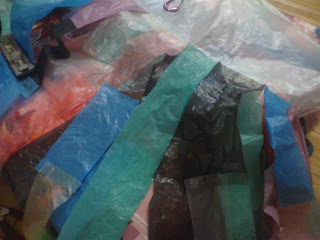 For the body, I cut a hole on the top part of the box for Ekiel's head, leave the bottom part open [for the legs of course] and two smaller holes at the side for the arms. The angpows are for the backside, feet and beak. I glued them using double sided tape. 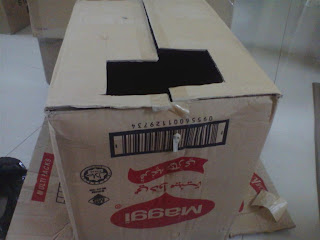 The day before the competition, I called EKiel from the office and told him to collect leaves for the feathers.

I went back and found two separate plastic bags with leaves in it. It was pretty obvious which were Ekiel’s collection and my mom’s. 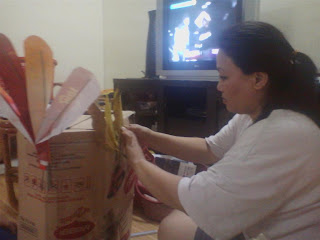 sticking the leaves aka feathers

I used hot glue to stick those leaves because double sided and ordinary glue is not suitable.
Watch out for the hot glue gun though.

When I accidentally burn myself, all my son said, “Mommy, so senang pun tidak pandai kah?
Not only my skin berasap, my hati pun berasap juga larr dengar that statement.

By 9pm, I ran out of leaves because the gardener came the day before and cleared the backyard. It was Friday night and the event was the next day. I had to finish it because I had to go to work the next morning. So I told Ekiel and my sister, “Jom, we go find leaves by the roadside”. Thought they were hesitant, they came anyway. We were happily collecting the leaves when few cars slow down to look at what we were doing (maybe they think we’re PTI). My son said he is embarrassed and my sister was telling us to hurry as her reputation is ruined.

So I ran home leaving them behind. *evil laugh*

The next day, I had like 11/2 hours to get him and myself ready for the event so my sister did his makeup.
Ekiel had a choreography which he was supposed to do when he is on stage, unfortunately, he became ayam mati. He just stood there, forgetting to show off the nice wings I made, and left.

*bangs head on the wall* 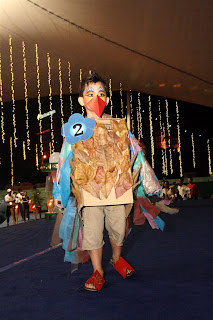 Birdboy in action, or rather not in action

He won anyway. I truly believe he deserved to win based on his costume alone, which is the point of the event; to use recycle material and create an environmental themed costume. Yes, yes, also for the fact that I spend three nights finishing it.

By the way, he decided what he wants to wear next year. DRAGON!
*sighs*

Posted by angelicbug at 2:28 PM