I love The Carpenters.
I grew up listening and singing to their songs.
So when the Palliative Care Association announced that The Carpenters will be performing in this year’s show, I was, excited. 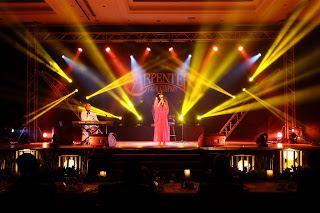 However, that hilarious journey wasn’t that all funny.

There were few amusing bits, but the part with the “imaginary” children choir and when the lady hiked up her skirt and does that weird little dancing, OMG, that was dreadful. Maybe it was just me who did not get the “foreign” humor.

BUT they did sing The Carpenters’ hits beautifully.

Those were the days when I faithfully listen to the radio every night hoping someone somewhere would ‘dedicated” me a song. *sighs*

What happened to that hopeless romantic young girl?
She grew up.

Anyway, the PCA collected RM77K through the painting auction.
I love the stained glass elephant by Mimie which were sold for RM7K! 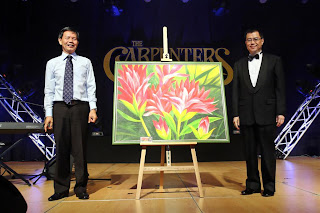 Among the paintings that were auctioned that night. This collected RM20K

I didn't managed to get a good video of the performance for I was seated WAY at the back, but I managed to get this when The Carpenters From Kempsey performed at the PCA House the day before.

Posted by angelicbug at 3:49 PM