We finally arrived at our hotel, Landmark Hotel in Batu Pahat at 3.00am. We carried all our things and I was behind this guy who was smoking outside earlier. I seriously thought he would hold the door for me, instead he just let go and I nearly bang the glass door. WTH. I was so damn pissed. It is bad enough he didn’t offer to help carry our things, but at least hold the damn door larr. My friend, Mimi, the ever so nice girl said, maybe he’s a hotel guest but he walks behind the reception counter. Employee or no employee, common sense larr. I was too tired to excuse his rude and idiotic behaviour, so I said, out loud, as I walked into the hotel, “What a jerk. At least hold the damn door. No brain is it? It’s common sense larr to hold the door. I would hold a door for a guy. Bloody idiot”. The guy did not even bother to look at us what more to apologize. He just sat there like an idiot. *sighs*

The Front Office screwed up the bookings and we had to settle for a room of three, which is fine for us. BUT when we got in the room, we were only given 1 towel. Mimi called and asked for three more, but the guy said, one room gets one towel. *rolls eyes* When my friend insisted, they finally send two towels. OMG. Breakfast was only for two. I still don’t understand how or why they charge a room for three but provide facilities for one or two.

The heater takes forever to hear so I had to take a cold shower at 3.30am and 9.30am! There was blockage on toilet floor so when someone showers, the whole floor is flooded. Very gross. The walls were thin and we could hear everything and anything from outside and inside the hotel. The only standing lamp wasn’t working so the room was dark. Our view was the next building. The staff, I’ll give them a 1 out of 5 for service and that’s because they called us to tell us we need to check out by 12pm! I think I’ll deduct another ½ point for not smiling at all.

Thank goodness we only spent 8 hours in the hotel! The only reason the bride chooses this hotel because it was newly renovated. I do not want to think what the hotel is like before that.

Somehow, at that moment, it didn’t matter because we were so happy to just be with each other and sharing girls’ talk where I was asked another RM1million question. *winks* It's only when I think about it now, I get irritated. Boleh?

We continued our drive to the bride’s house and thankfully we didn’t get lost this time. *grins*

When we got there, the bride was in the middle of her makeup so we decided to have something to eat first because we were hungry. They served masak merah chicken, rendang beef and acar. It was yummy! 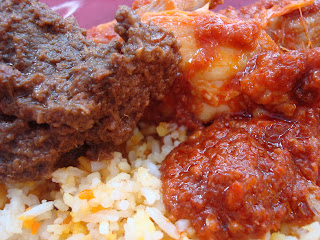 Then we went and hang out at the bride’s room, took some pictures. 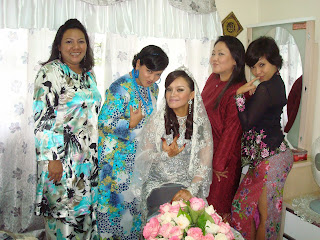 The bride, true to her words, showed me the sirih junjung. *hee* We laughed about it thinking no one will take it seriously. They didn’t know I was determined to get everyone a daun sirih because these girls are one of the nicest people I know and I want them to live a happily ever after. The groom arrived soon after,t he bride went out to wait at her pelamin and that’s when I carried out the “Sirih Junjung Mission”. 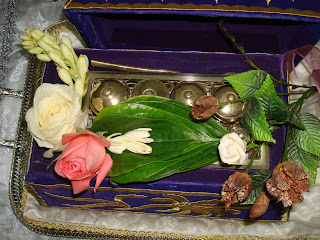 It was funny. I quickly grabbed the leaves and the girls were telling me to hurry. I tried to pull the leaves when I realised it was sewed together. So I had to pull the leaves one by one when someone said, “pull the pin! Pull the pin” and I was like “WTH! There’s no pin larr”. Some more they can demand; want a smaller leaf larr, want a greener leaf larr. *rolls eyes* By the time, I am done, I’ve ruined the dulang hantaran. I am sure the bride knows and understand.

The daun sirih didn’t taste too good and I had gastric soon after. Oh well, it was for fun though. And no, no soul mate. So far. Yes, very optimistic about it. *chuckles*

While chewing, we were told to gather at the pelamin to collect “toll”. I was surprised to hear about this tradition but we sat there anyway. We were so easily pleased; we gave in after the second “green packet”. It must be the effect from the leaf. 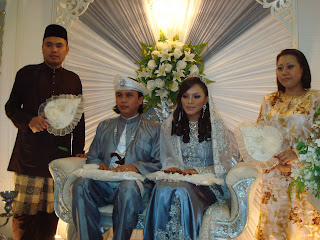 Then we had to make our trip back to KL because Suzy has an early video shooting the next day.

On our way, we stopped by at a stall, recommended by the locals to have otak-otak and ­mi bandung which was delicious. 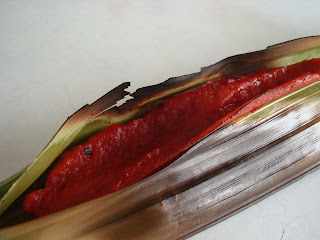 My friends are always about good food, good laugh and good fun. The best combination.
I am already looking forward to our next road trip to Penang next year! *woohoo*

The ahli Kelab Tujuh Jahanam planned to go for a night out that Saturday but I was too tired to shake my booty so we settled for coffee instead, which was good.

Next day, went window shopping again at Sunway Pyramid. I managed to get couple of things for Ekiel. *sighs* So damn difficult to go anywhere when you’re on a tight budget. My sister took me to Ayam Penyet for lunch. 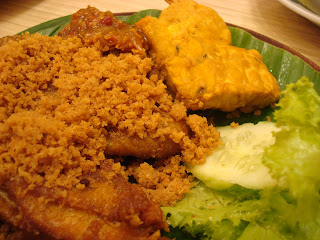 I had chicken and we ordered beef soup. YUMMY. Then we walked around aimlessly. I finally found a shop that sells cool cufflinks for RM99! I find it expensive because we can buy it online for half the price for the same item.

I was too early for Christmas in KL. *sighs* There were shops selling Christmas décor though. I just wasn’t in the mood to go gaga over Christmas yet.

In our flight back from KL, we were gloomily informed by the Captain that there were no in-flight meals. *gasps* How can that happened? The poor boy behind me was so unhappy. The dad had to get him two cups of instant noodles. *tsk tsk tsk*

Posted by angelicbug at 2:32 PM