I wonder, why Fate, in all her wisdom would set up a 107 year old woman with a 38 year old man? Even if she is in her 80’s as suggested by the Registration Department, the whole thing is just madness. 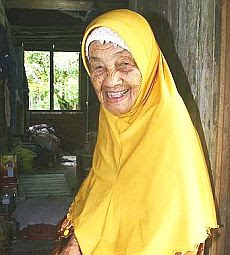 Pics from The Star Newspaper
Mek Wok Kundor, the infamous hunter for husband no. 23

She could have been his grandma for goodness sake!

Is it love?
You know, it’s hard to say and the only one who would know the real story is the husband. However, in below article, it was mentioned that the National Narcotics Agency offered to transfer the husband to a nearby rehabilitation centre and yet he declined because he said he is more comfortable in the centre he’s currently at. Puh-leez larr, you claimed to love your wife of four years and yet you would not want to transfer to a nearby centre where she could visit you frequently.

The age gap is not the only thing that surprised me. The fact that she had married 21 times before left me speechless. No wonder my friends and I are still single. Cupids, Fate and Universe are all so busy finding this woman, Mek Wok Kundor, husbands. *chuckles*

Btw, Mek Wok Kundor is only 2 husbands away to be the Most Married Woman in the world, and apparently there is a Guinness Record for that!
Malaysia definitely boleh!

I applaud her for not giving up on love and marriage. You would think after the first 10, she would rather be single. I would!

On a different note, why is it that every article available on the web or even on printed newspaper differs from one another? I also feel bad for Mek because now the whole world think she’s on the lookout for husband no. 23 and was even said eyeing on a 50-year old. Another article claimed that the representative of Kuala Berang, Zawawi Ismail would help Mek to create an FB account in order to help her find love no. 23. *grins* FB bah.

No, this is not her FB profile. This is just to prove a point. With no intention to upset anyone or for it to be abused and misused in any way.

What does Mek think of the news sensation about her hubby hunting?
She is offended.

So, that's not true?
What is the truth then?
I guess we will never know.

Whatever it is, I do wish her all the happiness in the world.

Lala, I came across this news as well... really speechless lah!!! Lucky In Love mbe!!!

LOL. she is very lucky indeed.
My friends and I want to ask her secrets ni..