My Miri trip was absolutely fun.
I love Miri not only because my friends were there to show me the best of Miri, but because the food was super delicious and the people were great.

I took the everyonecanfly airlines and I was surprised when we had to climb the small staircase to get into the airport. Thankfully my luggage wasn’t that heavy but it was a hassle for those with children or even senior citizens. Why can’t they just use the “thingy” that connects to the plane is beyond me. They can include it in the airport tax like everything else they’ve included no?

There were long queues at the immigration counters and sadly, people in Miri do not queue up either.

Anyways, all irritation disappeared when I met my friends and they brought me to this place where I had one of the best noodles I have ever tasted. It was just a simple dish of noodles and meat, [maybe I was hungry] but the taste was OMG delicious. Unfortunately, I don’t remember what I had or where I had it. *head hangs in shame*

I enjoyed myself so much in this trip, I forgot about everything else.
Oh well. More reason to revisit Miri. If I get the *ahem* “green light” to go.

Fun fact: I thought I was imagining all those seahorses. They even have 1Malaysia seahorses. Well, sorta. It was by the roadside and I have no time to take a photo. So I had to ask and apparently, seahorses are the “mascot” of Miri. 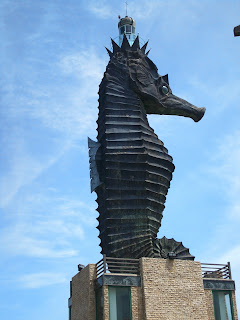 Another fun fact: Grand Old Lady is not a lady but the first oil rig built in Miri overlooking the town and the South China Sea. 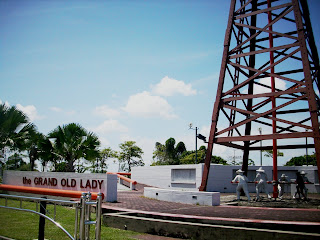 I also had the best ABC Cendol and Rojak. If I have no shame, I’d licked the Rojak plate clean. 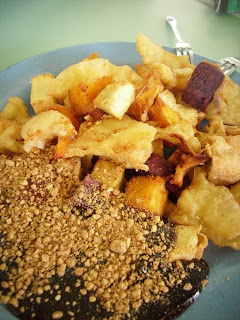 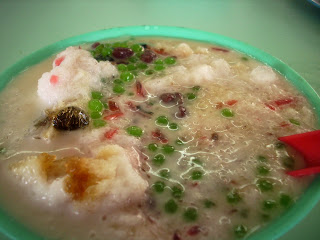 Again, the only thing I remember about this location is it is very near the green gas station.

Ooh, and the guy who wore the exact same outfit as my friend.

The public parks in Miri are awesome. The one we visited was on a slope with suspension bridges to connect the several entries of the walkway. Below is the pool where children can dip in to cool off the afternoon heat. Kids were screaming their heads off in every direction but it was a family fun venue which Ekiel would love. 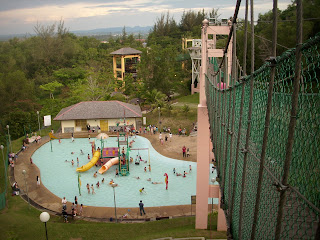 The beach parks are also great. I just find it weird to see families enjoying their “picnic” at 11pm.

Posted by angelicbug at 9:52 AM