I am pretty sure I read it somewhere in the blogs and what not that the best cheap shopping destination in Manila is Divisoria. Cherry Third Quarter Kinky Queen confirmed this. The Filipino chick we met in KK confirmed this. So I googled the map and it look pretty far from the hotel, but hey, if people say that’s the best cheap shopping place, then to Divisoria we shall go.

The first morning, we wondered how to get to Divisoria. We tried our luck by asking the reception if there were any direct jeepneys and guess what, there is. We only had to walk to Pedro Gil which is only five minutes away. Now, someone whom I shall not name said, based on common sense, we must cross the busy streets to take the jeepneys.

We did that and I nearly lost my head because I forget that in the Philippines, they drive on the other side of the road. I automatically looked to my right when suddenly a big bus come speeding from the left. Jatuh my jantung. Before I could recover, we found out that we were on the wrong side of the road and we need to cross the road again. 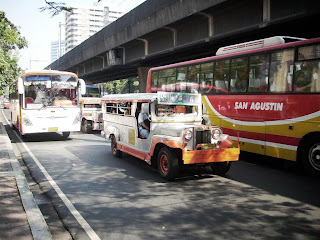 We took a jeepney and paid RM0.50 and told the driver to show us where to stop. We passed by City Hall, Rizal Park and not long after, the driver told us to go down. I told myself it wasn’t that far until I realized we were in Binondo instead. I know for a fact that the two places are not that far apart, so we asked the tricycles driver how to get to Divisoria. They replied to us in Tagalog but from the hand gestures, that place is nearby. We told them we don’t speak Tagaolog, so they tried explaining to us in English but somehow his translation went back to Tagalog and his friends laughed at him.

Now, although I have googled Divisoria plenty of times, I have no idea how and what the place is like. I imagine it looking like our pasar malam. We walked around, unsure what we were looking for. Our biggest mistake was, we wasted too much effort looking for the Divisoria we imagined that we didn’t really enjoy the hustle and bustle of the area. There plenty of stalls selling almost everything imaginable. From fruits to shoes, plastics to clothes. Everything. 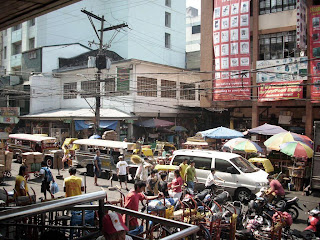 We found the New Divisoria Shopping Mall and it wasn’t what we imagined it to be. In the building, there were smaller stalls that sells everything in bulk, however, the clothes and things available wasn’t what we had in mind. So we went out and continued walking. Now, the heat was terrible and the place was crowded. We did find few stalls that sell cheap and fashionable clothes from RM3.70 and that kept me going. We grabbed a quick lunch at Chow King and the food is yummy. 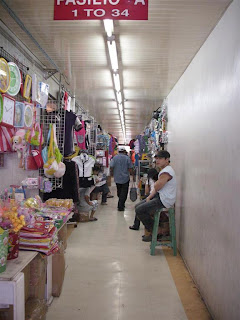 Our adventure continues and we found a stall that sells pretty masquerade mask at really cheap prices. I don’t know when I will ever need a masquerade mask, but I bought one anyway which the lady customized for me on the spot for only RM7.40. The two ladies also bought a mask for their own. 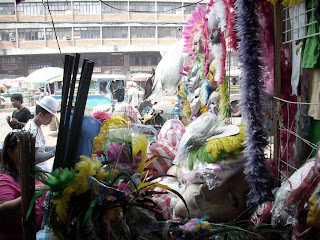 lots and lots of masks

While walking we found shops that sells wedding gowns, laces, clothes, scrubs but no clothes. I went around looking at the wedding dresses [out of curiosity] but my sister finds it a little pathetic so we went to the other block instead. 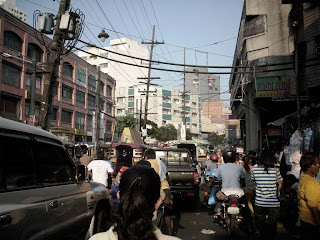 the haze and the crowd can be overwhelming

We found another shopping mall called 168 Mall and the things there were cheap with plenty of options. I was devastated to know that my shoe size is not common in Manila and I only ended buying a pair of working shoes and a pair of casual shoes for RM7.40 each. I also bought two slippers for only RM3.70 a pair and Ekiel’s slipper only cost me RM1.85.

At the end of the day, I announced to the girls that I am never coming back to Divisoria. I know I wasn’t the best shopping buddy with my migraine, the heat and the crowd. But now, when I really think about it, I am looking forward to go back and really venture that place. 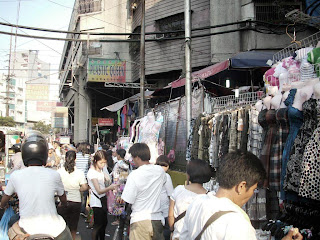 you could literally shop till you drop

This time I will go earlier, with a hat, lots of water, a better camera and a big shopping bag. My fingers turned blue from all the plastic bags twisting around my fingers. 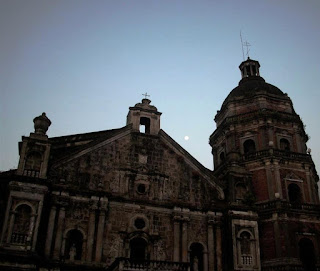 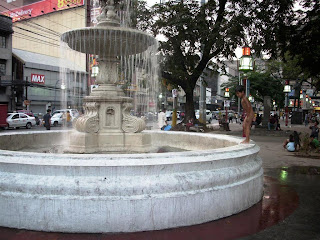 a local boy taking his bath at the fountain

We got back to Manila around 7pm and had dinner at Red Ribbons. Again, food was good.

My sister has colleagues (let’s call them The Quiet Guide and The Talkative Driver) from Manila who did some project at her office in KL. They came that night and took us out. They showed us a seafood place where diners need to go buy their seafood from the vendors outside and bring them to any of the restaurants available to be cooked. The concept sounded weird to me, but it was interesting to see people lining up at the stalls and bringing their dinner into the shop. The place was packed so we opt to go to Mall of Asia for dinner [again] at Gerry’s Grill for some local food. Don’t ask me what we had because I don’t know and yes, no photos were taken but trust me when I say the food was excellent especially the beef soup thingy and the grilled fish.

We went around Mall of Asia and decided to walk around the outdoor side facing the Manila Bay. There were plenty of things to eat, do and see. I am pretty sure it’s a popular dating location as there were many couples giving each other the lovey-dovey look. 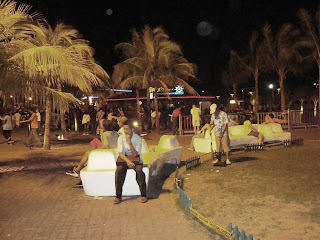 the crowd at outdoor Mall of Asia around 10pm 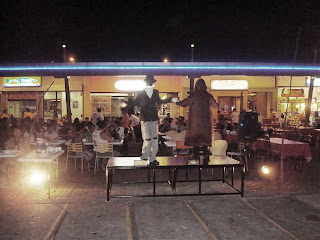 the do silly and yet entertaining dances

While I was enjoying my local bubble tea with the gentle breeze blowing my greasy hair, a couple in front of me was busy taking their photo with a camera phone. The funny bit is, they don’t stop at one photo. After the 5th or 6th photo, I decided to make it fun for them and gave them the peace sign pose, the comel-comel pose, the serious pose and my personal favourite, my infamous macam mau kiss orang pout.

Fyi, Hooters Manila is located here. No, we didn’t go see because our guides were not like that.

Our nice guides took us around Manila. We went to many places, which I don’t remember now. We also crossed over river using the bridge with the funny lights. The lights went on like waves and it doesn’t serve any purpose except being the joke of every driver (The Talkative Driver’s especially) who crosses the bridge. 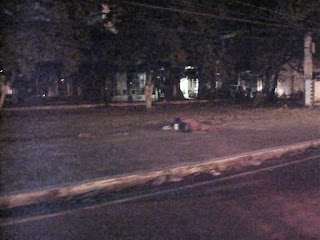 some just slep by the roadside. a pitiful sight really

Anyway, going around Manila at night is differently beautiful especially when those churches and interesting buildings are lighted perfectly. A must for all photographers. 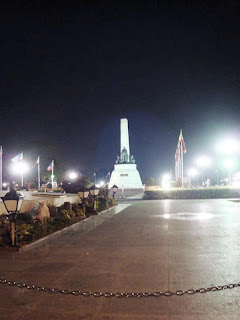 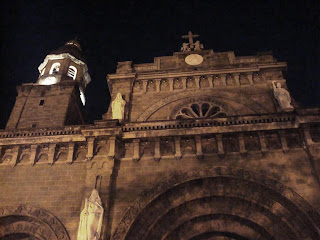 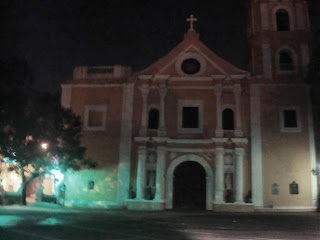 one of the churches in Intramurous 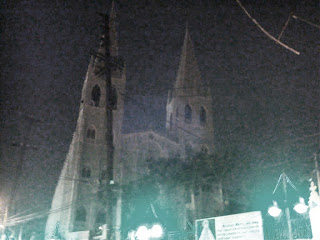 a chuch made of steel

The Quiet Guide and The Talkative Driver offered to take us to see Taal Volcano the next day which we accepted graciously and I’m glad we did.