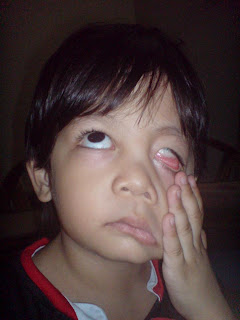 I swear the weekends/public holidays feel shorter these days. Nevertheless, it felt good for I get to spend some time with my son.

The Cherry Third Quarter Kinky Queen took us out on Sunday. We went to the amusement centre where Ekiel really enjoyed himself. I couldn’t stop laughing when he wanted to play one of the car racing machines. With the big screen, he looks so tiny but it didn’t stop him from turning the steering wheels right and left and change the gear from time to time. At one point, he even went down so he could step on the gas pedal. *LOL*

How do you turn this sideways?

You should also see his expression while playing the “Hit the crocodile” machine. 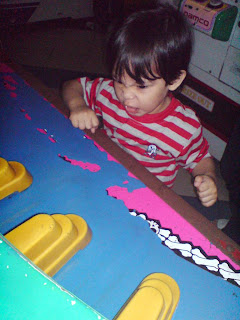 The next day I took him to the barber. While waiting for our turn, he refused to cut his hair saying my mom already cut his hair before. I told him it is a non negotiation circumstances and he needs to cut his hair so we could take a decent picture of him for school registration.

I lifted him and put him on the barber chair. He didn’t look too happy but surprisingly he didn’t even try to fight back. I think he knew it was pointless. Hee. He was very obedient and did what the barber tells him to do. For someone who couldn’t sit still for a minute that was a big accomplishment. 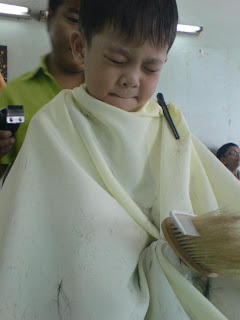 Now he looks so different. Somewhat like an accountant but there’s something cheeky about his look now. 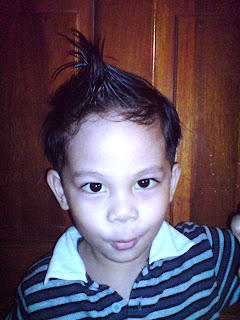 I did promise him a toy car if he cuts his hair so I took him to the supermarket to pick one. He went around looking and touching every toy he sees. The toy selection wasn’t that great so I told him we would go somewhere else to get it. Then I thought I’d get him one of those box toys, you know the one with junks and a lousy toy in it. He shakes a few boxes and surprised me again by saying he doesn’t want it and all he wants is some drinks. I asked him if he wants chocolates too and he said no.

I think I would hit the Jackpot this week.

Honestly, I am freaked out.
But I am confident that both Ekiel and I will be able to handle it.
One baby steps at a time kan?

OMGs... adorablenya ekiel lala.... he is such a handsome boy and ya ohh he looks really different after he had his haircut... so mana u intend to send him to school?

I am sending him to Shan Tao pre-school. Everyone is telling me the importance of Chinese language. I know tapi I worry sebab Ekiel ni pemalas bah.

aren't you excited? I am (more than my son I think)