riding the bus with me pt.2 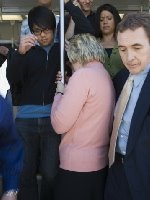 Remember the movie “Speed” with Keanu Reeves, Sandra Bullock, a bus, a bomb and all? There are no bomb or bad guys trying to do something to the bus. Instead of Keanu Reeves, you have the bored looking bus driver who I am pretty sure is very much influenced by the movie. No, there’s no Sandra Bullock, sorry, but you do have… me. Hehehe. Okay, I know they’re driving a big vehicle, but that doesn’t mean they or the passengers are safe if the driver drives it like a madman. Besides, I don’t think any of the passengers appreciate the “thrilling adventure” or the “washing machine” motion.

The scariest bit about these rides is the “emergency brakes”. Imagine this; the bus is packed with passengers and you could barely balance yourself by holding on to the impractical holder thingy. Standing in front of you is a guy with a huge backpack who doesn’t give a damn who his backpack is hurting. You could barely move, and the last thing you want is any uncomfortable body contact with the other passengers. You’re swinging left and right like the orang utan you saw in Animal Planet. When you think you could not possibly embarrass yourself more, suddenly the driver slams the brakes and you lost your balance, and you somehow ended up kissing the guy’s backpack.

Even with everyone ramming you from behind, everyone pretended it didn’t happen. Malaysians are too well mannered to be talking about it. Besides, what can anyone say anyway? Unfortunately, you do sometime encounter one of those passenger who looks at you as if you purposely want to rub yourself against them. *rolling eyes* Eh hello. You think you’re Brad Pitt is it? Even IF you are Brad Pitt, I have better things to do!

Never think you’re safe just because you’re sitting down. Once I landed on the floor of the bus because I was sitting right at the back of the bus and is exposed to any unfortunate incident. I was more mortified than hurt. I also have bruises because I bang the window, the front seat, the pole thingy, etc. You can never tell, when it’s coming or what will hit you.

Most time, due to exhaustion or simply lack of sleep I would doze off in the bus. (Sometimes even when I am standing). That is when the unfortunate incident with the window happened. One day, on the way back from work, I was so-so tired because I had a long day and I haven’t had proper sleep for days. So I dozed of like usual. Suddenly my head hit the window and even in my sleep I could hear a lout “thump”. I woke up and everyone in the bus looked at me smiling or giggling. Me the control queen pretended they were laughing at someone else, gone back to my sleep. Only God knows how humiliated I am and the amount of pain I was experiencing. I swear I had a small bump on my head because of that. The same thing also happened in the commuter. LOL.

Sleeping in the bus does not only bring me shame and embarrassment, but also a momentary heart attack. Imagine waking up in a strange place and you realized you missed your stop. Happened to me only once, but it was such a nuisance to catch a cab or another bus to go back to where you’re supposed to stop.

Ahh… the joy and the pain of bus riding. I have plenty of stories to share… maybe I should write a book about it.
Posted by angelicbug at 1:16 AM