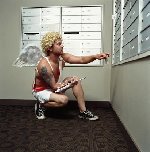 A friend of mine who keeps telling me he isn’t going to settle down anytime soon is planning to get married at the end of the year. When I first read the news in an email, I thought I read it wrongly or I got confused the name with someone else’s. I mean he was so convinced that marriage is not in his to-do-list at the moment. HA.

I found out when a friend email me the news. The mail also mentions it’s supposed to be a secret. Why? I don’t know. It’s not really a secret anymore now is it? *rolling eyes* I don’t know anything about this girl except she is pretty - he likes them pretty. I didn’t even know he was seeing anyone which is why I was very surprised. I used to ask him about his love life and he would just laugh and say why settle down when there’s so many women out there. Well he didn’t exactly say that but you know what I mean. *wink*

I am happy for him. Very happy.

Now I wonder. What made him change his mind? He had relationships that lasted for years but there was never wedding plans. Why this one?

How do you know? Was there music in the air? You get a congratulatory mail from the cupid association? You had a dream about it? Subtle signs from the universe? Pressure from certain people? I always find it interesting because I don’t even know if a guy is sincerely interested in me.

People tell me “you will know”. If you can’t even describe it, then how do you know it’s real? Maybe you’ve been reading too many Danielle Steel. Maybe you’ve been watching Bridget Jones Diary a little too much. Maybe you’re still drunk from “that night”. Maybe you’ve been inhaling too much glue. Fyi, I have nothing against marriage or love at first sight or any of those lovey-dovey thingy. It’s just that…
Posted by angelicbug at 3:07 AM