a two in one entry

The Chinese New Year celebration is over and life is back to normal again.
Why should/must I put an end to this happy feeling?
I like waking up after 7.00am.
I like lounging around like a deserted dugong on a beach at 2.00pm and watch cartoons/TV with my son.
I like so many things but I am angelicbug and bugs do not get what they want.

This year’s ang pow collection is pitiful but it’s expected. One of my aunt jokingly said "When are you going to get married so I don’t have to give you ang pow anymore" Heh? You think I am simply going to grab a guy by the street and get married so YOU can stop giving me ang pows? NEVER. Some ang pows disappeared since I started working. Whatever happened to "ang pows are for single people"? *tsk tsk tsk*

Like every other celebration, the holiday is a non-stop eating marathon. We gambled a bit and I won RM8.00 - my siblings’ pocket money. *evil laugh* 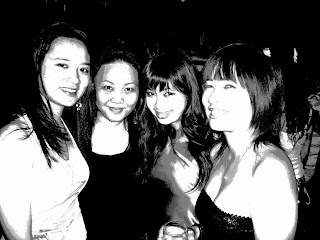 I went for a drink, seriously A DRINK, with some friends the other night in one of the local clubs. I swear most of them are half my age. The place was overcrowded, the crowd was so-so, the music was so-so, the one drink was *two thumbs down* For few seconds I wondered if I am wasting my time going to clubbing. I mean what was I thinking? Luckily the not-so-happening-anymore-party girl in me kicked in and I had fun. In my own world. Too bad there’s nothing for me to drool at. NOTHING.

And... that’s it. Nothing much happened. Still it was a good break.

Work is crazy. I hate coming back to work after the holiday. You have gazillion of things needing your immediate attention. EVERYTHING is URGENT and everyone is pointing fingers at you for holding up everyone’s work.
Damnit.

They really think such drastic action will have any effect on our Malaysian diet huh? Man... they are SO wrong. But what do I know. I am only the statistics the government is trying to umm... "save". Like now I am so craving for one or two of those juicy Mushroom Swiss Burger from Burger King.

They’ve banned ciggie & liquor ads. They increase the prices ridiculously year after year and yet that did not stop Malaysians to smoke, drink and be merry. You think the government would learn by now. *tsk tsk tsk*
I feel sorry for the agencies working on fast food accounts though. There goes your bonus. Hee.
Wouldn’t it be nice if some people would stop treating us like kids?

On a totally different topic, I was talking to some girl friends when it hit me. I discovered one of the many reasons, I am sure, why all my relationships sucks. I unconsciously ruin it for reasons I am not so sure although I somewhat figured it out but refusing to admit it.

Damnit. Why do I have to be so darn complicated?
Posted by angelicbug at 6:55 PM